The build begins with the floor piece. There are apparently different regional names for this and I don’t know what the name is in the Tosa region. The term カワラ, or Kawara, is shown a lot for it in the instructions, so I assume that’s the regional term in Tosa. I’ll have to send an inquiry about these things at some point.

The first step in the kit is to bevel the bottom edge of the kawara. To aid in this, there are laser scribed lines. Interestingly enough, the sheet with this part is actually scribed on both sides. I’ve never seen that in a model kit. This means that the manufacturer had to register the wood and the laser in some way so that the cuts on one side line up with those on the other side. 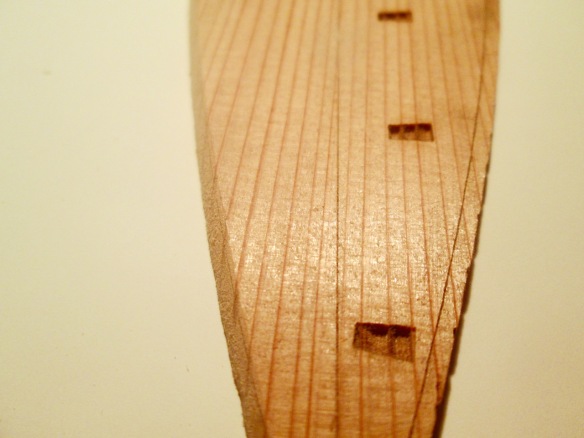 Something interesting about working with the Japanese cedar. Where those dark lines in the grain show, that’s where the wood is more dense. When carving, you have to be aware of that because those lines are harder to cut through than the lighter colored wood in between. These dark lines are also harder for the laser to cut through. So, if you look in those etched trapezoidal holes, you can see lines of wood that line up perfectly with the grain. I started to trim out those ridges in the cut-outs. There aren’t that many really, so I’ll probably continue with that as I go.

The other issue with those lines is that they can make the laser scribed lines very hard to follow. Woody Joe uses laser scribing to mark the beveling lines on their kits too, but they use light color Hinoki, so I ‘ve never had to deal with hard to see scribed lines before.

The next thing is to partially cut through the Kawara at the dashed line.

This is where the bottom of the boat angles upwards. In his book Japanese Wooden Boatbuilding, Douglas Brooks describes this as Kirimage (kee-ree-mah-gay), or “cut bending”. I don’t know about the Tosa boats, but the Aomori boat he worked on used a technique like this, though there’s more to it.

In my case, I thought this was a good opportunity to bring out my Japanese hobby saw, which is a very thin pull-type saw. The problem was that it was too thin. It cut nicely, but didn’t leave room for the piece to bend upward. So, I pulled out my old razor saw and I cut the line several times, holding the blade at different angles, so that it would cut more of a V-groove.

With that done, I could add the floor frames. These are permanent frames, thought a long strong-back piece serves as a temporary alignment guide. This was interesting because so many Japanese boats are frameless, or close to it. At some point I’ll look into this further. On the real boat, these may have been added after the planks were in place.

I test fit the stem to how it was all going to work. The stem is made up of an inner piece and an outer one. The outer stem gets added later, but the inner one goes on next. I wanted to make sure I understood the design before continuing. 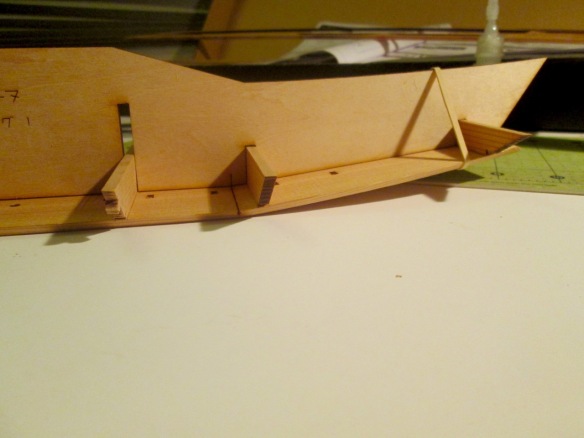 First, I had to made sure the strong-back was properly aligned. The main issue was to keep it centered and perpendicular to the Kawara. The piece is also to be spot glued at the very ends to keep it in place until it is removed in a later step.

Here’s where I’m at now. Steps 1 through 6 have been completed. I have only to bevel the stern most frame and the transom to complete step 7, then comes the lower planking. Japanese boats use very wide planks that are often very thick. On the Tosa wasen, the planks appear to be as much at 18″ wide.

I went ahead and started prepping the lower planks. Where I am cutting in the photo, the laser does not completely cut the dark lines of the wood, so I have to go over this with the X-Acto a few times on each side to cut the pieces free.