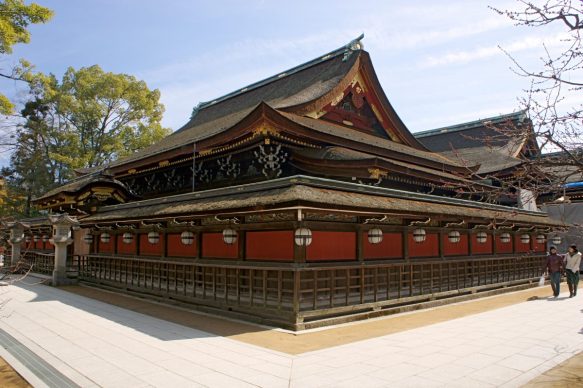 About a week ago, my ship modeler friend in Japan, Mr. Sekiguchi, explained a little about the Kitano Tenjin scrolls that depict the Kamakura period Umi-bune, and I have since re-read through online information on the subject to get a better understanding.

The scrolls represent the life of Sugawara no Michizane, a scholar and poet in the Heian period (平安時代  794-1185) who rose high in politics in Kyoto, then Japan’s capital. But, he had powerful  rivals in the Fujiwara clan that plotted against him, and he was exiled to Dazaifu on the island of Shikoku, where he died three years later in 903.

Apparently, there was much sympathy for Michizane, and shortly after his death, there were a number of calamities, including a lightning strike within the imperial palace. The emperor’s court fearing that these were caused by the wrath of Michizane’s angry spirit, decided to placate him by deifying him and erecting a shrine. He was given the Shinto name of Tenjin, and the shrine was built at Kitano, and known as Kitano Tenmangū.

The scrolls were painted a few hundred years later, during the Kamakura period, and there were apparently a few versions of them. The images shown in my previous blog posts appears to be from the scrolls known as the Jōkyū version, which consisted of eight scrolls, and date from 1219, fairly early in the Kamakura period.

If you really want to learn more about the Kitano Tenjin scrolls, I found an excellent 191 page English language pdf that you can download here: Kitano Tenjin engi pdf. This pdf publication discusses each of the elements of the scrolls. The last two pages even examine the umi-bune in the paintings.

As it turns out, the source for this is Kanagawa University, which is the home of the Institute for the Study of Japanese Folk Culture. I’d wanted to visit the exhibit hall on their campus during my last visit, but my schedule was too tight. I don’t know if it still there, but they had a beautiful looking wasen exhibit there.

The next stage of the model was to complete the hull planking. This was pretty straight forward. I’d already added the upper planks to the main hull, and just needed to complete the bow and stern sections. For these, I made patterns from the drawings and then trimmed the pieces up. 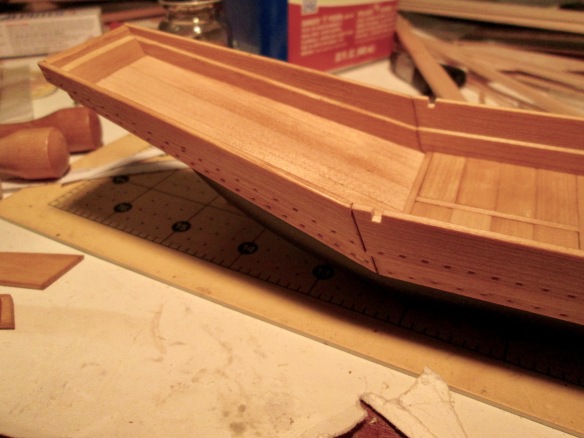 As with the other planks, I used my mortising tool to create the stitch-like pattern along the bottom edge of the planking. I didn’t have a photo of it last time, but here you can see a couple shots of it up close. 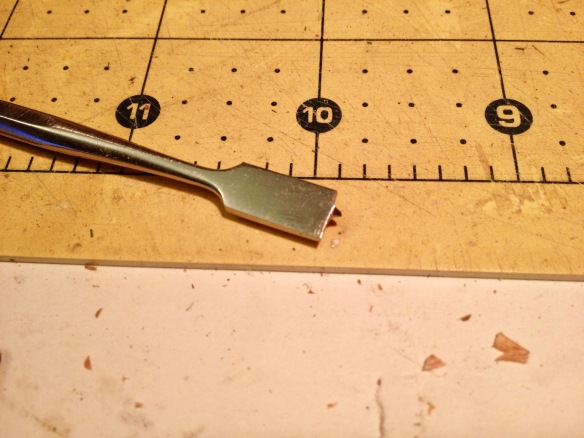 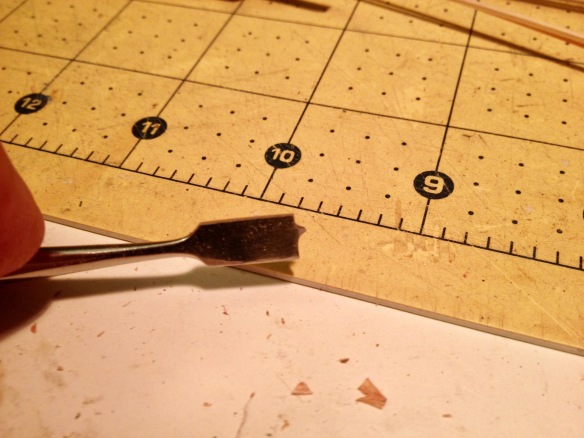 Again, the offset point was unintentional, but turned out very useful. This is nothing more than one of an inexpensive 5-piece steel chisel set. I don’t even remember where I got them – I think I was given these by someone. I’ve seen similar sets on the Micromark website.

I decided not to worry about the butt joint between the ends of the plank sections. I’ve seen museum models that show dark, short lines that might represent some sort of fastener. The following photo I took inside the hold of the Kitamaebune Hakusan Maru shows staple-like iron fasteners holding planks together, but this is type of ship that would have appeared, some 600 years after the Kamakura period sea boat. 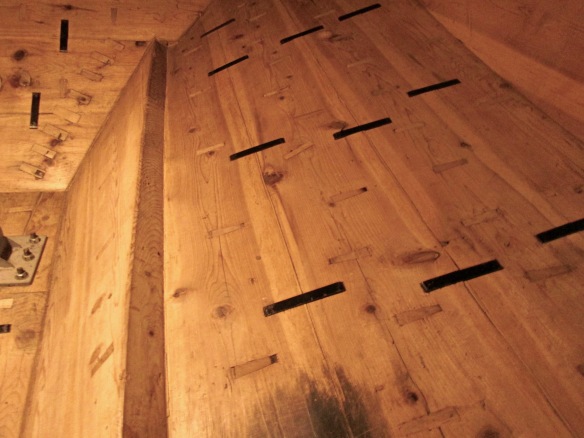 More likely I think is the use of something like the dovetail fasteners illustrated in the following photo from Douglas Brooks’ blog entries during the building of a sabani in Okinawa back in 2009-2010. But, at the small scale of my model, I decided to omit this detail, as it would be both too difficult for me to make or even simulate, and it would also be nearly invisible. 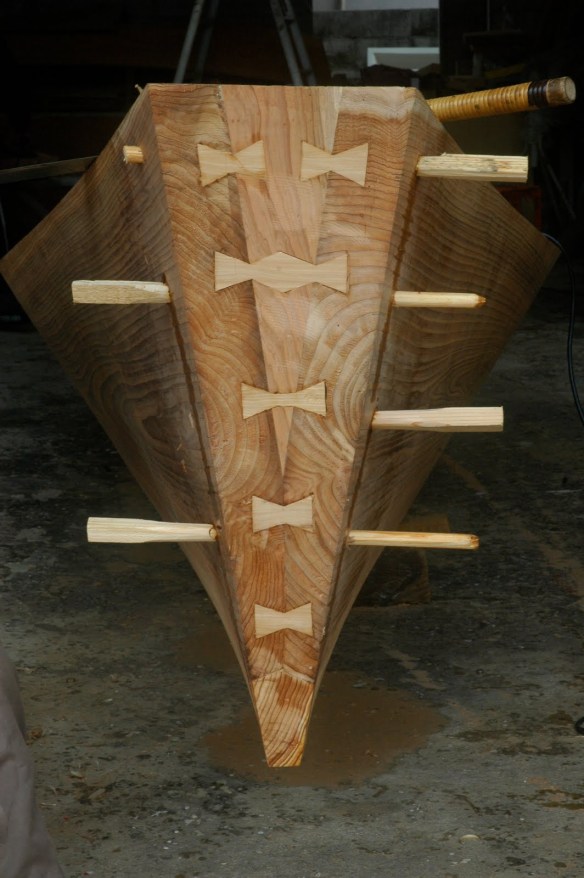 The next detail then, was to notch the upper bulwarks planking and add the transverse beams across the hull. These would extend far enough out from the hull to support a pair of outboard rails that run nearly the length of the boat. It didn’t take long to cut the notches and make the beams since they were all identical to one another. 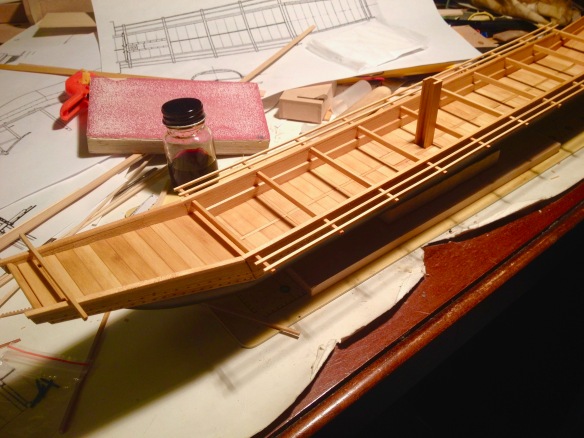 With the beams in place, a caprail was added, locking them down into place. The main section of the outer rails were added too, as well as the bow deck. At this time, I also corrected the piece that runs across the front of the bow. I originally had two pieces, the upper piece over lapping the lower, but replaced this assembly with a single bow piece, which seemed to be more correct according to the drawings.

One thing that seemed very odd was that the main museum models and the drawing showed a beam riding atop the bulwarks at the bow. The drawing and models show a forestay labeled a hazuo 筈緒. But, a forestay would exert an upward force on the beam, so it would have to be fastened down securely.

One drawing I’ve seen, shows the outer railing mentioned above extending all the way around the bow, and the beam fastened to it. Without this railing, I decided to add a below-deck beam, which this topside beam would be secured to with rope fastenings. This is something I’ve seen in other boats, so it seemed reasonable here. If you look closely at the bow deck, you’ll notice two square holes. It is through these that the rope fastenings pass. 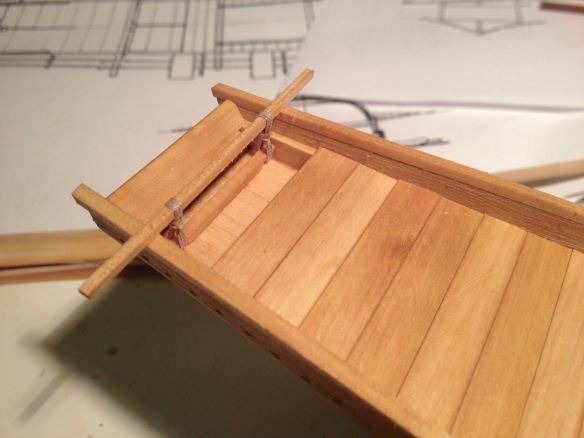 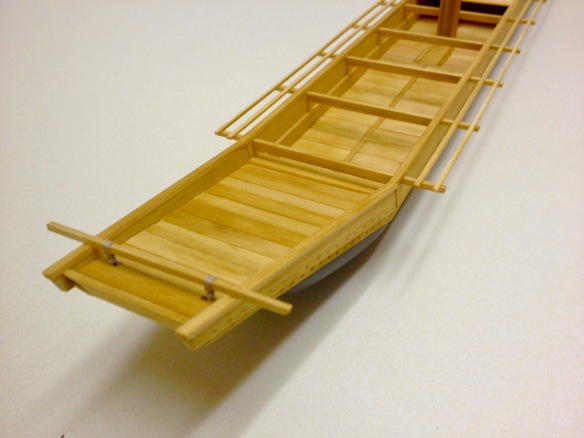 The next part of the build was easy, and involved planking the deck for the long deck house or yakata. I worked out the average width of the deck planks from the drawings and cut some strips of hinoki. These had to fit flush with the tops of the beams, which also meant that I had to adjust the widths of the planks so that an even number would fit between the beams. Of course, I also had to build a ledge for the ends of the planks to rest on. 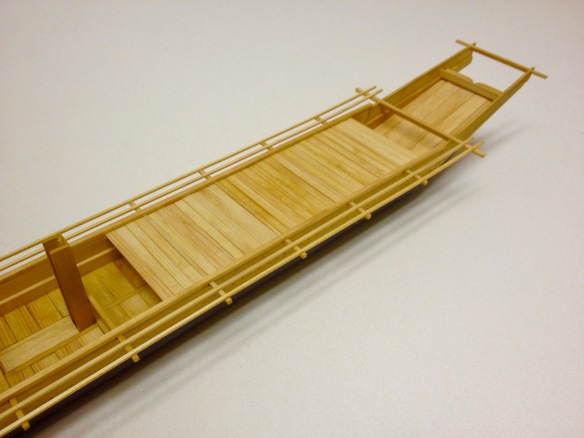 Next time, I’ll start on the completion of the stern and the construction of the deck houses and details.