The subject of the first of my Japan boat/model posts is a Sengokubune model (千石船模型) located upstairs in the Toba Seafolk Museum. Sengokubune, or 1000 koku ship, is a common term for the large coastal transports that were more formally referred to as bezaisen (弁才船).

This is a 1/30-scale model that has a rather interesting looking rig in that it carries a western-style mizzen mast. This places it to some period after Perry’s arrival in Japan, at which time building restrictions on large watercraft were lifted, and various western features began appearing on the otherwise traditional Japanese boats.

The mizzenmast appears to be one of the simplest modifications made to improve the sailing qualities of these vessels. Late period ships of this type have been built with bowsprits and keels with rudder irons, and so on.

Unfortunately, I didn’t get a better photo of the description that’s inside the case, and I can’t really translate much from this photo. 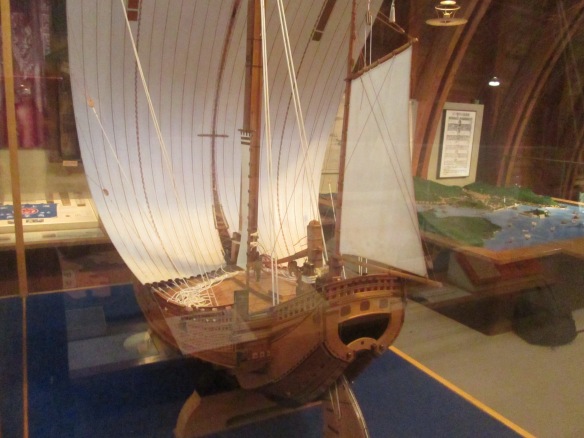 Here’s a better view of the mizzen mast. This looks like a very simple add-on, with structure and rigging that doesn’t appear to interfere with the function of the main sail or rudder.

The model shows the components of the ship very clearly. The one thing I never noticed before is the rope that runs down the back of the rudder. I’m not sure what the purpose of this is, but I don’t recall seeing this on any other model or on the Hakusan Maru replica ship.

As I look at it now, the ropes that run down the side of the rudder and back up appears to be simply looped through a pair of holes above. This is one of those things that may simply be a model feature. I don’t think this was done on the real ships. But, then, I don’t know that for sure, so I’ll be looking for that detail in the future.

The remainder of the photos should provide some good reference material if you’re planning on building a bezaisen model. 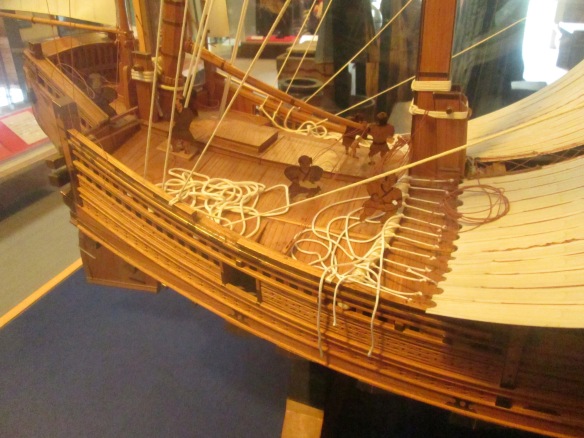