The subject of my second Japan boat/model posts is a large Higaki Kaisen model (檜垣回線) located in the Edo Tokyo Museum. The ship is a type of sengokubune (千石船), or 1000 koku ship, a type of bezaisen (弁才船) or coastal transport.

The model is one of the largest models I’ve seen in Japan so far, very nicely detailed, and is particularly nice in that it is relatively easy to photograph as it is fairly well lit and you don’t have to shoot through glass or acrylic. I don’t know the exact scale, but I think it must be about 1/10-scale. I believe there is a larger model in Japan, but this one is readily accessible. 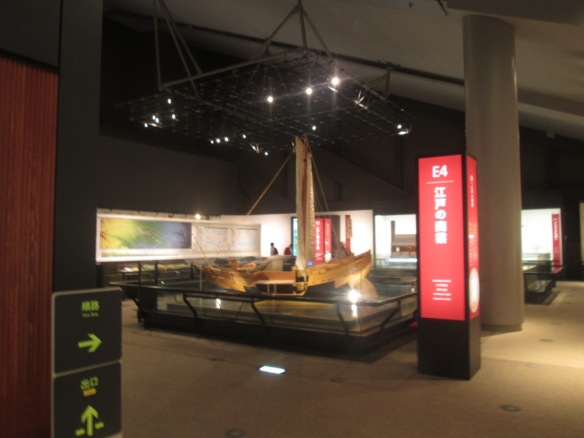 Of course, at this scale, the excellent amount of detail was really nice to see. It was easy to compare this with the Woody Joe model kit that I built. It would have been nice to have seen this model up close while I was building that kit.

I said earlier that it was nice that the model was well lit, but that was only partly true. The entire museum is dimly lit and I did have to adjust the exposure on my computer to bring out the details. But, the existing lighting was good enough to be able to do this without washing things out too much. 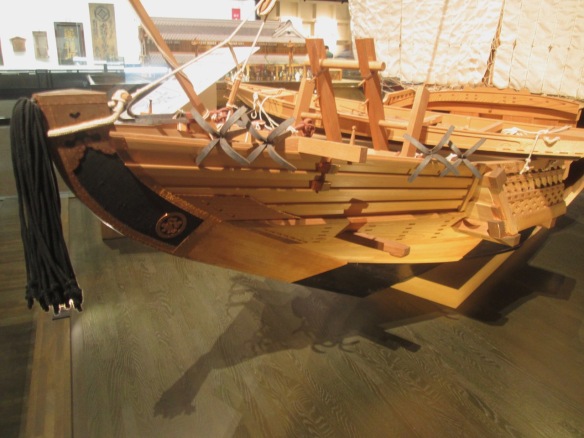 You’ll notice that this model, has a small boat, strapped across the deck. This was called a Tenmasen and was used as with any larger vessel, to ferry the crew to and from shore. It might have been used to load and unload some cargo, but I would tend to doubt that. These ships operated along specific routes and were not trade ships. They carried bulk commodities primarily between Okasa and Edo at a time when Edo had rapidly become one of the largest cities in the world, and Japan’s largest consumer market. 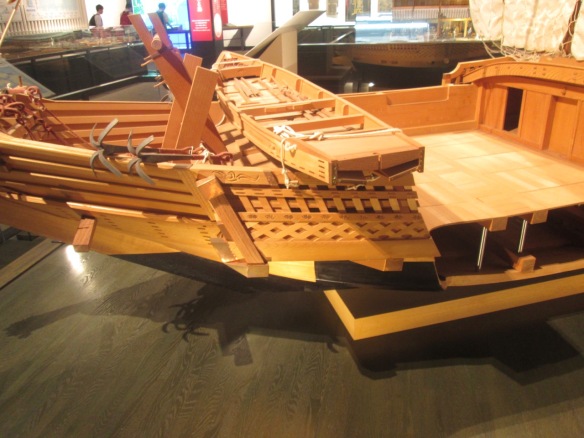 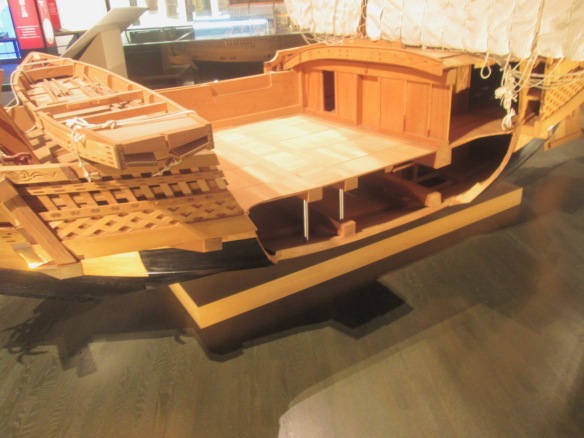 The model is a cut-away type, showing a glimpse of the interior spaces and construction. However, it doesn’t show how cargo was stored or how the crew lived in the large cabin on the deck. Here, you can better see the design of the tenmasen.

Here are two views focussing on the interior. The one interior detail of the crew cabin is the cooking hearth with two pots. Other examples I’ve seen of coastal transports show only a small hearth further back in the ship. To me, that probably makes more sense, as I would imagine the only real cooking that was done was the cooking of rice. Other foods were likely pickled vegetables, dried fish, and so on. But, I don’t know that for sure. 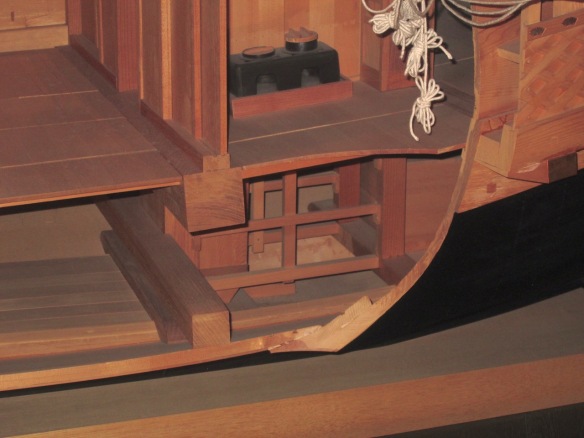 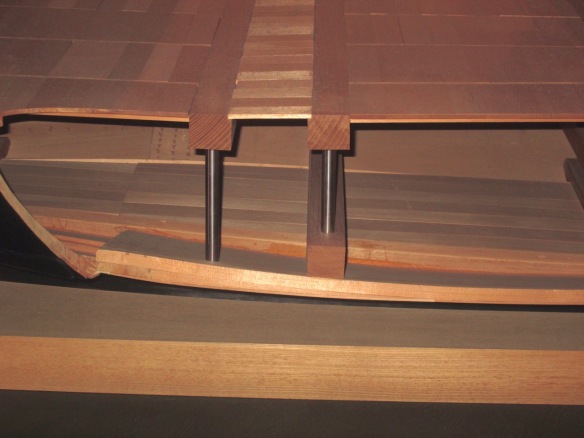 The cutaways show how thick the planking was on these ships and how heavy the beams were. The lack of frames is a feature of Japanese watercraft. Though small boats are sometimes fitted with a few sawn frames, the planks are mostly edge fastened, and any frames are added after the hull is built. 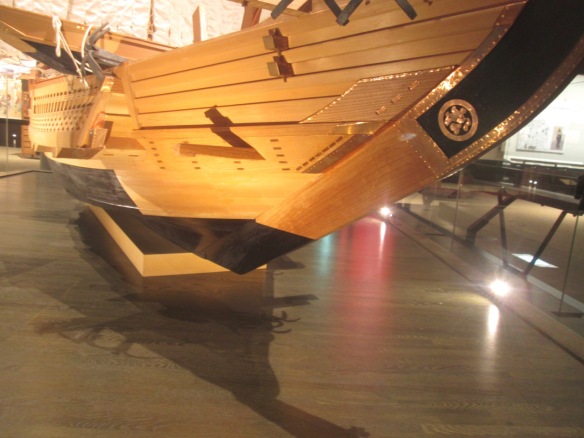 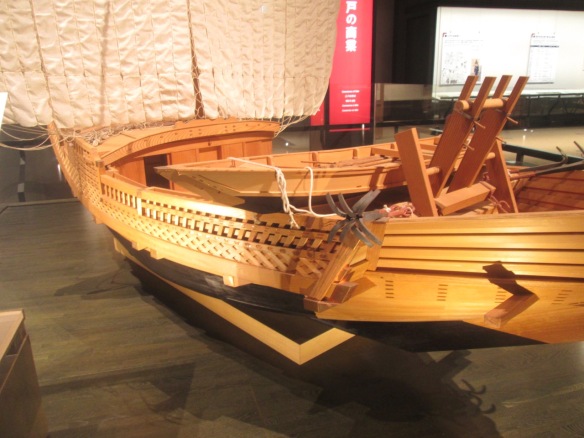 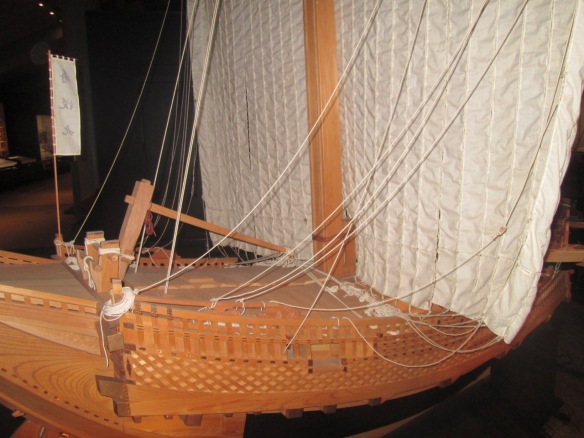 It was nice to see how the sail handling lines, except the sheets, were simply tied off to the rail, which must have been very strong. The detail of the sail itself was also interesting to see. The sails on Japanese boats were designed to be self-reefing. When winds got very strong, the gap between sails would open open and spill the wind. 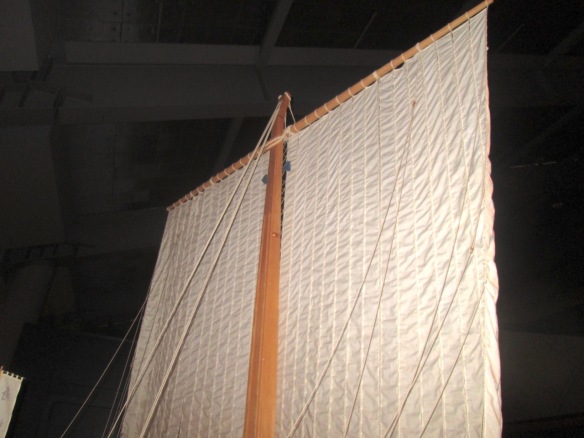 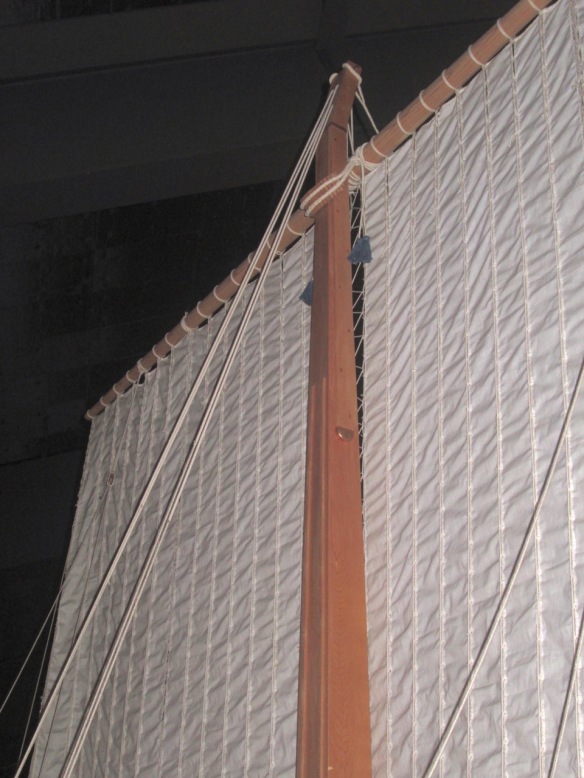 As I mentioned in my post showing the Sengokubune Model at the Toba Seafolk Museum, my model definitely lacks tassels. Here they appear to be possibly on the ends of the lines used for the parrals. Also, you can see the gap in the lacing down the center of the sail. That’s a feature missing in the Woody Joe model that would be a very nice touch to add. 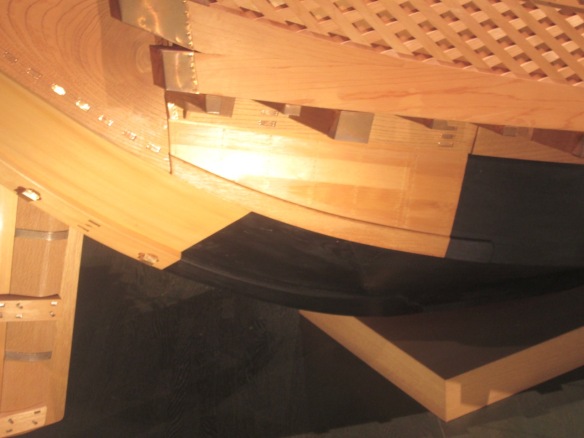 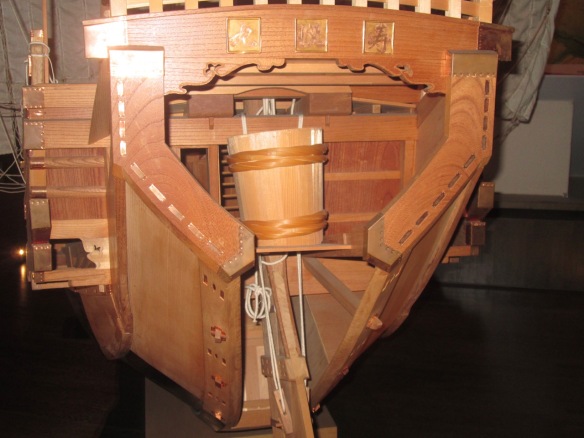 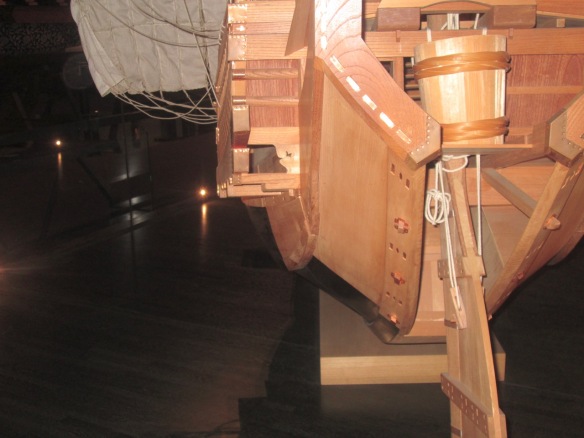 The stern detail was interesting, but I have yet to determine what the large tub is for inside the rudder cove. I’ve seen this on other bezaisen models. At first, I was thinking maybe it’s storage for fresh water, or something. It’s too tall to use as a bath. Now, I am wondering if it was something to quickly throw into the water if someone goes overboard. It seems awfully big for that, unless one simply climbs inside and waits to be picked up. This is something more that requires some investigation.

Possibly the most useful part of this exhibit is actually the description of commerce and flow of goods from the Osaka area to Edo. Reading this gave me the best understanding yet of the importance of these ships, the commerce they carried, and also the first serious reference I’ve seen to the Tarukaisen or the barrel cargo carriers, and how their trade was related to the Higakikaisen. I still haven’t seen much reference to what the difference was between the Higakikaisen and the Tarukaisen. Supposedly, Tarukaisen were reinforced for the heavier cargo, but I’ve never found any details. 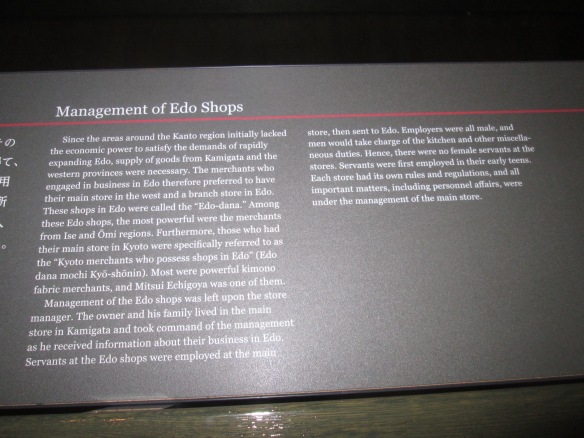 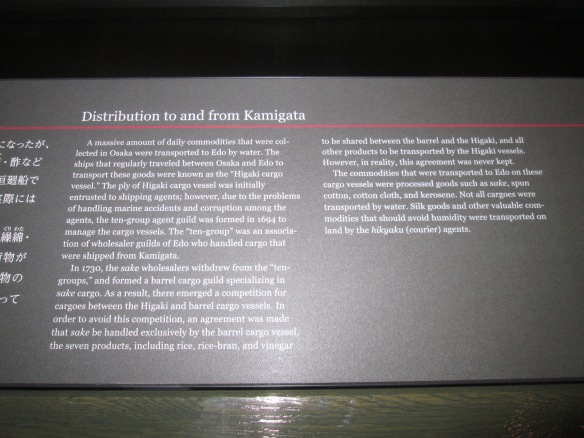 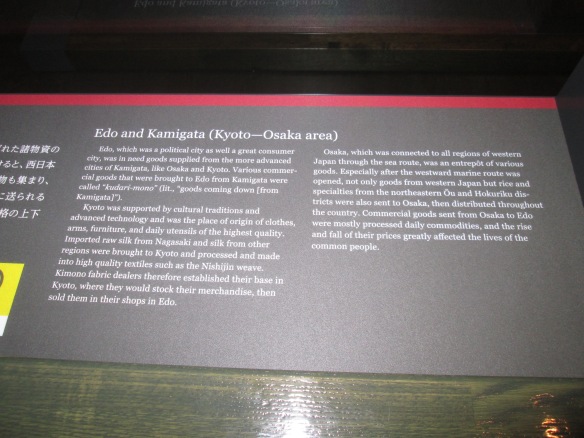 Finally, here are a few more detail photos of the Higakikaisen. Sorry about blurriness in some of the photos. 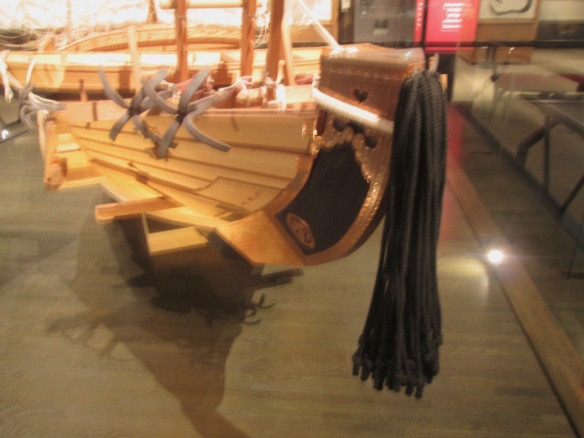 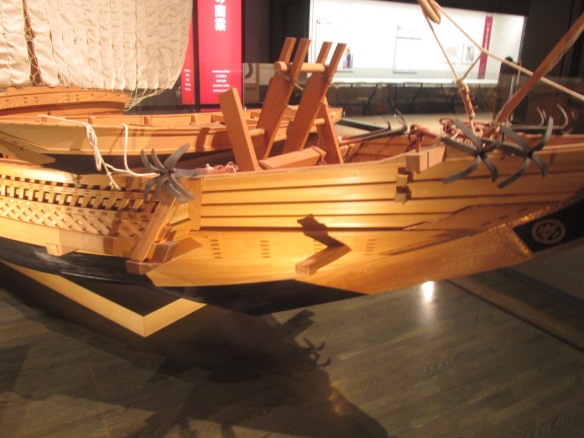 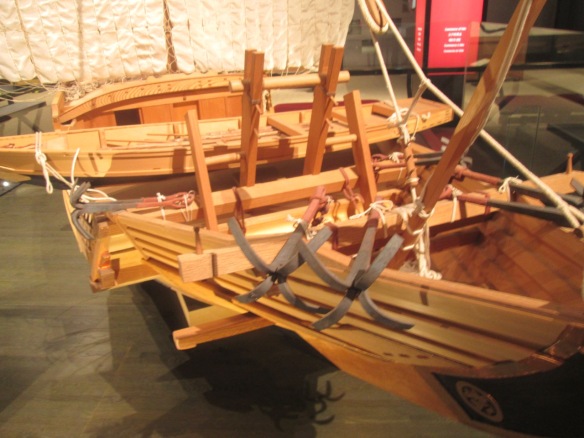