Kobaya-bune (小早船), or simply, kobaya , is a term for a type of military-style traditional Japanese vessel that was fast and maneuverable. The size of the boats labeled kobaya, which translates literally to “small, fast,” seem to vary widely. I have seen boats called kobaya that had as few as 6 oars, and larger ones that had 24 or more oars, but my access to details on these warcraft is limited.

During the Tokugawa period (A.K.A. Edo period), which began in 1603, daimyo were forbidden to have atakebune. During the time of relative peace, the smaller warships, most commonly sekibune, were turned into gozabune (御座船), highly ornate and brightly painted vessels used by daimyo and their clans for ceremonial and other official purposes.

A gozabune of the Hachisuka clan of Tokushima prefecture.

Working with the Plans

The Paris drawing describes a small row galley, but is in fact a gozabune of a type commonly referred to as a kobaya. The drawings I found were a bit tricky to use as they came from either poor quality scans from a book, or good quality scans of a low resolution image, again from a book. But, all I needed were some larger measurements and basic details.

I scanned the least distorted image I could find and then imported it into Adobe Photoshop to clean up. From there, it went into Adobe Illustrator, which allows me to do a bit more with the image.

I scaled the drawing up, based on the measures and scale shown on the drawing. For this model, I decided on a more common scale for American modelers of 1/32. I also made a 1/20-scale drawing, but it seemed a bit too large for now. In the future, if this turns out well, there may be a call for a larger model and one that might be scale compatible with other things I’m considering working on.

Japanese boats basically had no, or few, frames, so if I built in a traditional-style, I would have to create some kind of mold for holding things to the correct angles and all. Because this kind of boat was completely decked over, this gave me a little room to “cheat”. So, I decided to make a couple bulkheads that would help me shape the lower hull.

The first thing I wanted was to make patterns for the shiki, or bottom of the boat, and to get the shape of an inner “keel”, much like those provided in ship model kits. I would use this as former to hold the shape of the bottom, which has a bit of a curve to it, and to hold the angle of the transom, or todate, and the stem, or miyoshi. I also used the plans to get the shape of the bulkheads. The Paris drawings simplified this a bit by providing a body plan and waterlines.

The shiki, or bottom, was the first thing I cut. I use a single sheet of 1/8″ basswood for this. I have been building from Japanese woods up to this point. But, since this is a very western scale of 1/32 (3/8″ = 1′), basswood seemed appropriate.

Getting the shape was a bit odd using these plans. The bottom is a single surface, but waterlines are meant to show the shape of the hull at specific depths. That’s not necessarily the shape of the bottom piece. So, I had to do a lot of staring at the plans to convince myself that the pattern I made for the bottom was correct. Or more importantly, that it worked.

I also used the profile of the plans to make an inner and outer stem, or miyoshi, carving and sanding it down to give it some taper. Gluing it all up at this stage was pretty simple. 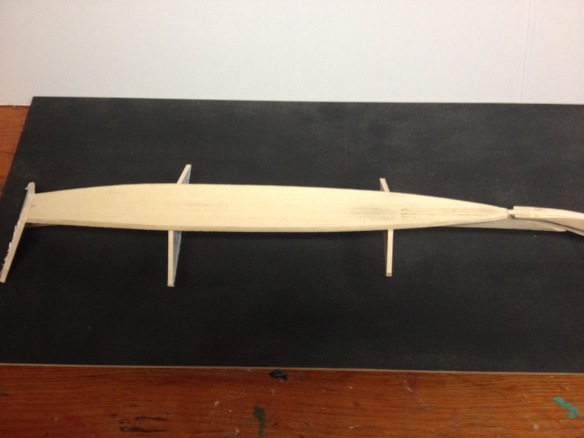 Working with basswood was as expected. But, I have to say, not using Japanese wood really left me feeling that something was seriously lacking. I’ve gotten spoiled by the scent of sugi, cedar, and hinoki, cypress, that I’ve been using in past models of Japanese boats. So, the rest of the model will be built using those woods. The existing parts will still be basswood, but that won’t matter, as the model will be painted over anyway.

The next trick, is how to make the lower planks. On the real vessel, these would be made of multiple pieces. But, I’ve found no specific information on their construction details. Paris didn’t record that kind of information. The only possibility is to look at the construction of the remaining replica coastal transports, or bezaisen. The most accessible of these is the Hakusan-maru on Sado island, which I visited in the Fall of 2016. But, again, this model will be painted.

At this scale, I don’t think showing the detailed plank work is necessary. Suffice it to say that these were not planked in western fashion. So, laying planking strips doesn’t make any sense. Better to cut a sheet to fit. But, to do that requires making a pattern, and the model needs to be held securely first.

Now, I’ve been dealing with the issues of holding a model like this in place for a while. The body of the model needs to be stiff, and both the transom and stem need to be held so they don’t bend or twist while holding a planking template against them. I came up with something that worked okay for the Hozugawa-bune model recently completed, so I did the same thing for the kobaya. I made a custom fixture for the model that holds the model securely. 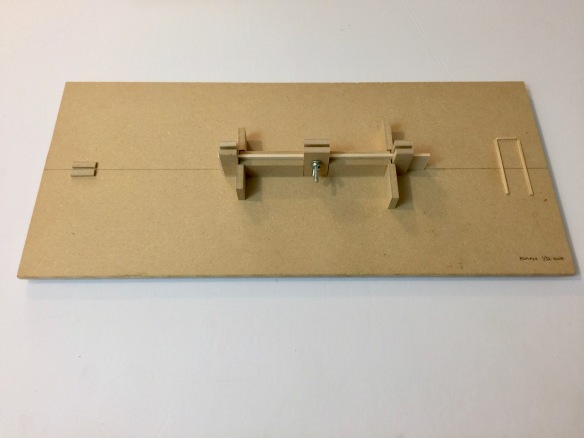 Now, this is a one-shot deal. It’s only good for this model. I’m not accustomed to making tools and fixtures, particularly ones that are customized for only one model. But, this seemed like the best option. You’ll note from the photos, that I realized that it would be easier without the miyoshi, or stem, in place, so I removed it for now. 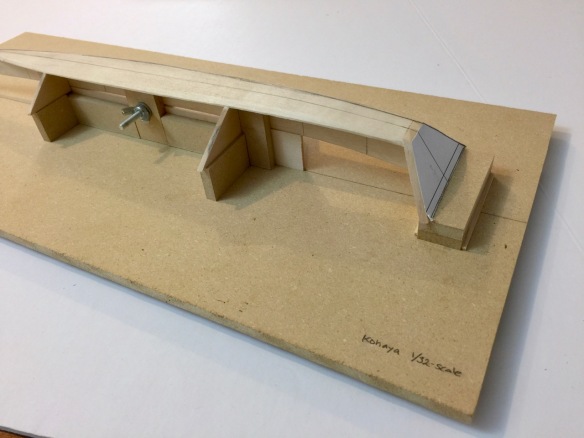 As you can see, I have a butterfly nut for clamping the hull, and I have supports for the transom and the bulkheads. This fixture should keep the base of the hull stable so it doesn’t bend or twist while the hull planks are measured off and put into place.

Next time, I’ll look at making the first hull planks.