If you look at the Paris drawings, you will see that there are seven pairs of main beams across the hull, not including the otoko, or great beam, at the stern. In each pair, there is one beam above and one below. The lower beam runs between hull planks. The upper beam goes through the hull planks and supports the rail assembly, which supports the yokes for the sculling oars.

Below, you can see a general cross-section of the hull. There are actually three beams running the width of the hull. Since I already have the internal framework, I don’t need the lowest most beam, so I’m calling the one just under the deck the Lower Beam.

While the diagrams here don’t show it, the lower beams should mortise into the hull planks, locking into place, and adding a lot of strength to the structure. Given the scale of this model and the type of wood I’m using, I decided not to cut through the hull planks. Instead, the lower beams will simply be glued into place, and will help support the deck.

It took me a while to figure out how I would define the actual position of the deck. Then, I realized that the upper beams could define all of that for me. The vertical position of the upper beams is very simple – the top edges can just line up with the top edges of the hull planks, as I can lay down a rail just on top of that. Assuming the deck is just underneath the upper beams, the lower beams will ride slightly below the deck. Of course, this all requires the hull planking to be nice and even and as correctly shaped as possible.

With the beam locations defined in the drawings, I cut the notches in the hull for the upper beams. For the thickness of the beams, I noted that there seemed to be some differences between the various plan views, so I did my best to figure out something that would work well for the model.

I ended up with beams 4mm square in cross-section. But, I decided to make these more rectangular in cross-section outside the hull, so I maintained the same width, but made them closer to 2.7mm thick. The notches would be cut to a depth of 2.7mm, so the beams were cut to lock into place.

In addition to the full length upper beams, you may note that there are a number of short beams that extend out from the hull planks to support the rails at the sides of the ship. These will be made the same thickness as the outboard portions of the full-length beams, 4mm x 2.7mm. 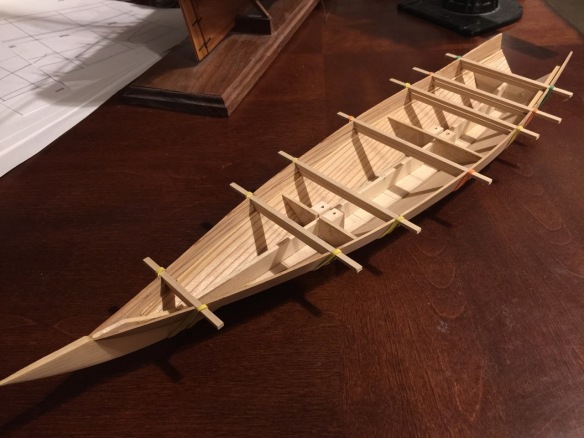 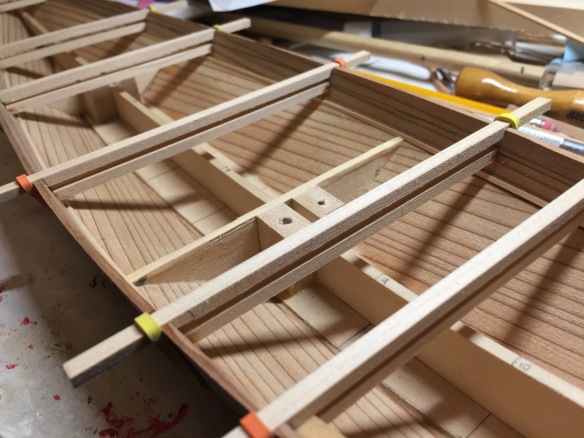 After this, I had to contemplate the next steps a bit. I was anxious to start dealing with the deck planking, but I also need to the rails and the short beams that support them. I also noted that the stern of my hull doesn’t rise up as much as in the Paris drawings. Also, the deck doesn’t follow that rise. But, I figured that I could continue with the deck construction the way I have the model now, and then I may add extentions to the hull aft, after the beams for the rails are installed. After all, it would easier to add them at this stage, rather than to modify the hull first and then try to figure out where to cut through it to add the beams there.

Of all the beams, though, the biggest problem I’m going to have is with the ōtoko, or the great beam, at the stern. In reality, this would have been installed before the hull planking, as the ends of the beam pierce the upper planks. I can’t simply cut notches to mount this one, so I may have to fake the construction a little. I’m putting off that construction until a bit later.

The full-length beams are now glued into place using Titebond and I have to decide whether to add the beams for the rails first or the ones for deck planks. In any case, the blog posts have caught up with my project progress, so now it’s time to look at this all and consider what to do next.