This is a list of terms relating to traditional Japanese boats, or wasen, that I’ve collected in my notes. This is not even close to being a comprehensive list, and the descriptions given are really quite basic. I’ve compiled this list from my own studies, and with the help of many others who are more knowledgeable than myself. 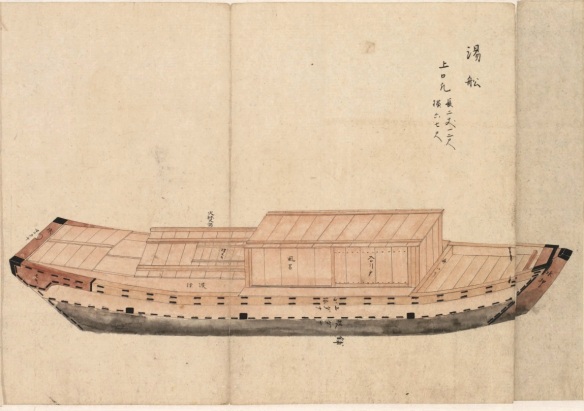 Sources of information include the book Funakagami, books I’ve collected by Professor Kenji Ishii, the works of Douglas Brooks, information parsed from the Internet, and information I’ve gathered personally through visits to the Toba Seafolk Museum, the Urayasu Museum, the Edo Tokyo Museum, and the Ogi Folk Museum.

At some point, I hope to write more complete and detailed descriptions for each of the terms. Probably, this will happen one term at a time, as I learn about each one and study them in more depth. However, the list of boat types seems endless, and I have only a small number listed here. I have many more that are not in this list, so I will expand it over time.

I’ve grouped these terms in a way that seems most meaningful to me. I’ve sorted alphabetically where possible, but, more importantly, in order or relevance. Note that this page is under construction and will be revised as time permits.

For the boat types and general terms, I’ve tried to include the terms written in kanji (chinese characters adopted for the Japanese language). However, in many cases, I’ve only found the names written in katakana (one of two phonetic alphabets used in Japanese). Boatbuilding terms, in particular, seem most commonly written using katakana.

I include the Japanese text in order to make it easier to search the web for images and information. Simply copy the characters and past them into your web searches and you’ll find a lot more than simply using the romanized words.

Amibune 網船 – a general term for a net fishing boat.

Bezaisen 弁才船- a class of large coastal transport, of which there are several types.

Junkōzōsen 準構造線 – term for a boat with a semi-structured hull.

Kuribune 刳船  – term for a boat with a dugout hull.

Bekabune ベカブネ or Beka ベカ- a one or two-person boat used in Tokyo Bay for shell fishing or gathering seaweed. The term might be used in other regions, as are the terms Beka, Kawabeka, and Noribeka. Bekabune are sometimes carried aboard larger Utasebune.

Chabune 茶船 – a general term for a small boat used for transport on rivers during the Edo period; the name refers to a small riverboat used for selling food and drink (Funakagami).

Chokibune 猪牙舟 – a small boat used as a river taxi during the Edo period.

Choro 丁櫓 – This is a term used for a small, sculled boat. The usage of the term varies depending on region.

Godairikisen 五大力船 – a large, local transport capable of operating on rivers or on the ocean.

Gozabune 御座船 – large boats used by aristocrats or high-ranking warriors. Often decorated for fesitvals. Built for use both on rivers and on ocean. Seagoing Gozabune were essentially warships used to demonstrate a warriors prowess during peaceful times. River boats used for the purpose were called Kawagozabune.

Hacchoro  八丁櫓 – an 8-oar boat used for pole-and-line fishing of bonito. At one time, boats of this type from Yaizu were commissioned as escort boats for the Shogun Tokugawa Ieyasu.

Hiratabune 艜船 – A large riverboat from 50 to 80 feet long, similar to takasebune. Long and narrow, flat bottom boat, used to transport freight. The largest had a capacity of 300 koku (Deal). Large hiratabune and takasebune can be easily confused due to their similar appearances, but hiratabune generally have a cutwater or stem.

Isanabune 鯨船 – An old term for a fast, multi-oared boat used for whaling. A more common term today is kujirabune.

Kurawankabune or  kurawanka くらわんか船 – a local, informal name (and not a very nice one) for a chabune used on the Yodo river to sell food and drink to passenger boats.

Marukibune  丸木舟 – a type of boat with a dugout hull. See the general type, Kuribune.

Marukobune  丸子船 – a traditional design unique to Lake Biwa. The name is apparently a reference to the round shape of the hull’s cross-section. The type was used extensively during the Edo period to carry cargo across the lake and features a bow with vertical stave planking, unique to Lake Biwa boats.

Nitaribune 荷足船 – a cargo boat used on the canals of Edo.

Sandanbo 三反帆 – a small 3-sail (hence the name) riverboat used to ferry passengers on the Kumano river in Wakayama prefecture.

Sanjukokubune 三十石船 – a 30-koku transport that was used on the Yodo river system for transporting passengers and goods.

Satsumagata サツマガタ – Literally, a Satsuma-style boat used for mackerel and marlin fishing on the west coast of Satsuma.

Sedoribune 瀨取り船 – a small boat for loading and unloading cargo from larger ships.

Suzumibune 納涼舟 – a boat for enjoyin a cool evening breeze

Tabune タブネ – a ricefield boat. Usually these were no more than large tubs pushed or pulled along flooded rice fields.

Takasebune 高瀬船 – long and narrow riverboat with a flat bottom, used to transport freight, typically. Large takasebune and hiratabune can be very similar in appearance, but takasebune generally have a flat bow with no cutwater.

Taraibune たらい舟 – a one-person tub boat from the Niigata coast, most commonly from Sado island, used for inshore and shell fishing.

Yakatabune 屋形船 – a large river-going pleasure boat with a deck house that could accommodate a large number of people for an afternoon or evening of entertainment.

Atakebune  安宅船  – A large, lumbering, castle-like war vessel used during the Warring States period. Mounted with a large protected structure housing two or more decks, this was the largest type of Japanese warship. During the Tokugawa era, these ships were banned.

Sekibune   関船  – Used in the Warring States period, smaller and faster war vessel than the Atakebune. For this reason, they are sometimes referred to as Hayabune, or fast boat. It has a protected structure on the main deck, usually with some protection for those on the open top deck. During the Tokugawa era, the use of these ships was severely curtailed, though many daimyo used them as Gozabune – highly decorative personal yachts.

Hayabune 早船     – Fast boat. Because Sekibune are much faster than Atakebune, they are sometimes referred to as Hayabune. The term may also used for a boat used designed to race, such as the boats used in a ceremonial race on the Kumano river.

Kobayabune 小早船 or simply Kobaya 小早 - Small, fast boat. Small, is relative, and a 55-foot row galley is smaller than most Sekibune, so it is referred to as a Kobaya.

These terms are very regional, so they may differ depending on the boatbuilder and the locale. In some cases, I’ve listed more than one term together, but there may be others as well. 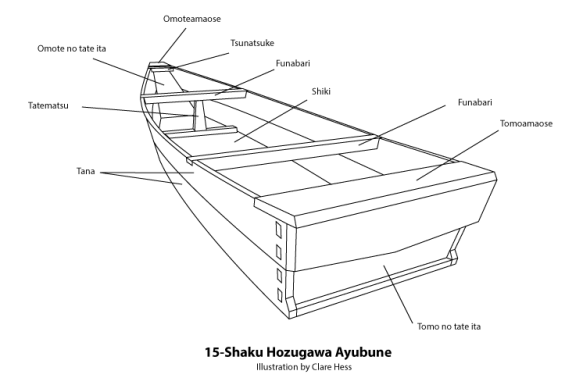 Ban バン – Himi term for a small deck at the bow. See Kappa.

Chigiri – a Niigata term for a dovetail key

Furikake – lower side planks of a marukobune

Hayao ハヤオ – rope attached to the ro, or sculling oar, to help control its motion.

Hayaoneko ハヤオネコ – wooden piece on the inside of the hull, to which the rope for the sculling oar is attached.

Heita – a style of bow construction found among many types of boats on Lake Biwa including the marukobune. A heita bow is constructed of sharply angled vertical staves, creating a rounded shape.

Kanzashi – mooring bits – short post for tying of lines, often square tapered, with a faceted nob at the end.

Konagashi コナガシ or Konaoshi コナオシ – triangular piece located behind the Miyoshi that effectively extends it underneath the bow of the boat, allowing the garboard planks to rise up at the bow.

Nobori – a pole-mounted banner or flag, usually tall and rectangular

Omoki or Omogi オモキ – a log carved out in an “L” shape forming the chine for a boat. The log planks of a marukobune.

Rogui ログイ- the pivot pin for a sculling oar

Sao サオ or 竿 – a pole, in this case used for propelling a boat.

Sekidai セキダイ or Namigaeshi (波返し) ナミガエシ – boards fixed at the rubrail which extend out from the hull and run the length of the boat, used to improve stability in rough seas.

Tateita 竪板 – an end plank at either bow or stern

Tomo 艫 – the stern of a boat

Tomo no ban トモのバン – Himi term for a small raised deck at the stern of a boat.

Surinoko – a type of handsaw

Wakitori – a type of plane