Not sure when I’ll have a chance to start this, but I recently broke down and ordered another kit from Zootoyz.jp, Woody Joe’s Kitamaebune kit.

This is the company’s latest wasen model kit offering, but has actually been out on the market for quite some time. The release date was February of 2016, I believe. But, I’ve been too busy with other projects to pay too much attention. Finally, with all my Japanese models on display for a month, the emptiness at home must have gotten to me (that and some extra money I’ve managed to set aside), and I ordered one from Japan.

The postman is very accustomed to delivering these EMS packages from Japan.

END_OF_DOCUMENT_TOKEN_TO_BE_REPLACED

The subject of my second Japan boat/model posts is a large Higaki Kaisen model (檜垣回線) located in the Edo Tokyo Museum. The ship is a type of sengokubune (千石船), or 1000 koku ship, a type of bezaisen (弁才船) or coastal transport.

The model is one of the largest models I’ve seen in Japan so far, very nicely detailed, and is particularly nice in that it is relatively easy to photograph as it is fairly well lit and you don’t have to shoot through glass or acrylic. I don’t know the exact scale, but I think it must be about 1/10-scale. I believe there is a larger model in Japan, but this one is readily accessible.

END_OF_DOCUMENT_TOKEN_TO_BE_REPLACED

The subject of the first of my Japan boat/model posts is a Sengokubune model (千石船模型) located upstairs in the Toba Seafolk Museum. Sengokubune, or 1000 koku ship, is a common term for the large coastal transports that were more formally referred to as bezaisen (弁才船). 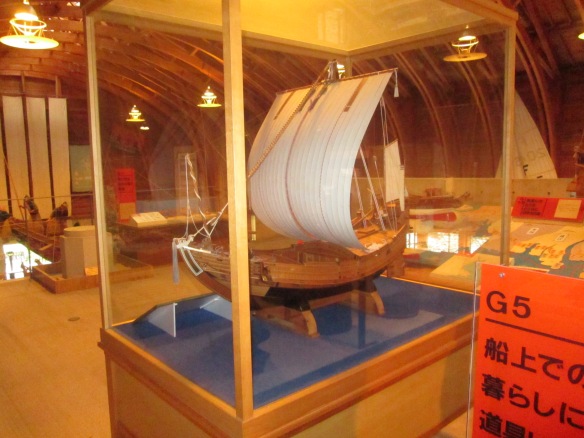 END_OF_DOCUMENT_TOKEN_TO_BE_REPLACED

I got a nice surprise a couple months ago when the editor of the Nautical Research Journal, Paul Fontenoy, asked me to submit a short article on my Higaki Kaisen model. So, a while back, I sent him some photos to use and a very short write-up with some captions to accompany the photos. Then, I got an even nicer surprise when I was told the model would appear on the cover. 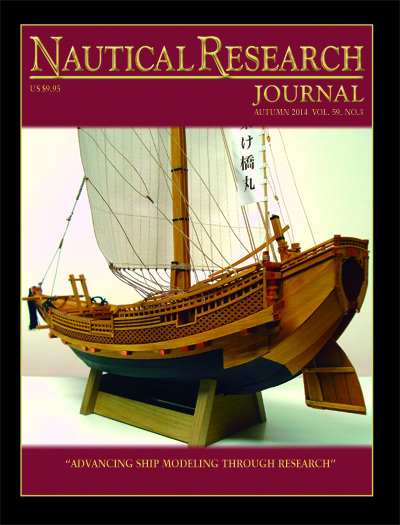 Having been an NRG member/supporter and having long admired the models that have graced the pages of the Journal, this was a really tremendous honor. Now, I’ll have to admit, it really the model subject and the uniqueness of the kit that got the model on the cover and not my artistry or craftsmanship. But, still it’s pretty nice to see it there.

Of course, being that I’ve been advocating Woody Joe kits here, it’s great to get people’s attention this way. I got an extra copy of the issue and sent it Woody Joe and they should be receiving it any time now. I’m sure they’ll be very happy to see their kit receive such attention.

The timing of this article probably couldn’t be any better, as I just submitted the proofs for my Higaki Kaisen kit review article, which will appear in Seaways’ Ships in Scale in the next few weeks. As for my history/build article for Ships in Scale, I’ve been getting pretty distracted with all the projects I’m trying to get done. But, with these articles both out in August/September, I’ll need to get back on it very soon.

But, while I’m mentioning the NRG here, I would like to say that this is a really fine organization, dedicated to ship modeling, and it deserves and needs your support. It’s not all academic and it’s not about being “purists” or anything of the like. The tagline “Advancing Ship Modeling Through Research” is just to say it’s about making better models, it’s about helping the modeler make better models, it’s about getting help to build better models.

Seeing my own model on the cover, I can’t help but wonder when the last time was that a kit build was featured on the cover? Times really do change. So, join the NRG. It’s a great organization, you’ll be supporting a great cause (ship modeling) and you’ll get your quarterly issue of the Journal!